“The New Normal” – By Bill Johnson

“The New Normal” – By Bill Johnson 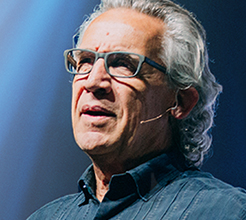 I have come to see that the normal Christian life means miracles, spiritual intervention, and revelation. It means peace, joy, love, a sense of well-being and purpose—all these traits that elude so many Christians. Written into the spiritual DNA of every believer is an appetite for the impossible that cannot be ignored or wished away. The Holy Spirit, the very Spirit who raised Jesus from the dead, lives in us, making it impossible for us to be content with what we can only see, hear, touch, taste, and smell. Our hearts know there is much more to life than what we perceive with our senses; we are spiritually agitated by the lack of connection with the realm of the supernatural. In the end, nothing satisfies the heart of the Christian like seeing so-called impossibilities bow their knees to the name of Jesus. Anything less than this is abnormal and unfulfilling.

Bad teaching and disappointment have robbed many people of this reality. But in these last days the Man of Understanding—Jesus Christ, our Wisdom—is drawing the deep things out of the hearts of His people, bringing them into the open. These things are the irrevocable callings of God. We live in an unprecedented hour where people are hungering for and stepping into their destiny in great numbers, fulfilling the purpose of God for mankind on earth. It’s an amazing, unprecedented time to be alive, and you and I get to be part of it!

To be effective believers, we must go well beyond the Christian life we have known. We must redefine “normal” Christianity so it lines up with God’s idea of normal, not the definition we have accepted and grown accustomed to based on our experiences (or lack thereof). The normal Christian life begins with the realization that we were put here to do the will of God on earth as it is in heaven—and what a joy it is to participate in that. The problem I see as I travel and speak with other believers is that many people are confused about the will of God on earth. Like me, they’ve often heard people use the phrase “the will of God” in Christian circles, but the concept remained fuzzy and vague. For most of my life I have heard people talk about seeking the will of God for their church, or their personal life, or their career. Many of us have treated the will of God as if it’s unknown or unknowable. Sincere believers might pray for days and weeks, looking more somber and beat-up all the time, and they’ll tell you they’re trying to find the will of God on a matter. I have done this, too! But the will of God is simpler and plainer than we have thought. In what is known as the Lord’s Prayer, Jesus said clearly and concisely:

“Our Father in heaven, hallowed be Your name. Your kingdom come. Your will be done on earth as it is in heaven.” – Matthew 6:9-10

The will of God is simply this: “On earth as it is in heaven.” Isn’t that basic? Isn’t it refreshing? When we pray, “Thy kingdom come, Thy will be done,” we’re praying for the King’s dominion and will to be realized right here, right now. That is a life-transforming, paradigm-shattering way to “do” normal Christianity. God has not kept His desires secret: He wants the reality of heaven to invade this rebel-torn world, to transform it, to bring it under His headship. What is free to operate in heaven—joy, peace, wisdom, health, wholeness, and all the other good promises we read about in the Bible—should be free to operate here on this planet, in your home, your church, your business, and your school. What is not free to operate there—sickness, disease, spiritual bondage, and sin—should not be free to operate here, period. That, in a nutshell, is our assignment as believers on earth, and that is what my church and certainly many others in the Body of Christ are working toward with more focus and energy than ever before. We are out to destroy the works of the devil. It’s an awesome way to live!

When we make this our primary understanding of God’s will, the other areas that trouble us so much will seem to sort themselves out.

What happens when we make this our mission? Lives are set free, bodies are restored, darkness lifts from people’s minds, the rule of the enemy is pushed back in every way imaginable. Businesses grow healthy, relationships flower again, people re-connect with their calling and purpose in life, churches grow, and cities feel the effects of having the Kingdom flourishing within them. Energy is freed up for Kingdom works in ways I have never seen before. Things happen regularly that are so extraordinary it’s like stepping into the pages of a good novel. But it’s not a made-up lifestyle; it’s the lifestyle for which we were made.

A young man named Brandon, who is a graduate of Bethel School of Supernatural Ministry, was visiting friends in Washington State. They were at a restaurant and the waitress came to take their order. Brandon began to perceive things in his heart about the woman, and he shared them with her. They pertained to her relationship with her mother. The waitress was amazed, and she became so emotional that she had to take a break.

While the waitress was away, Brandon noticed an Asian couple staring at him from across the room. The woman had wrist braces on because she suffered from carpal tunnel syndrome, and one of her hands was completely frozen in a fist. Brandon walked over and asked if he could pray for her. She said that they were Buddhist, but they were willing to receive prayer. He prayed for her and she was healed on the spot. The whole family was instantly overjoyed and began praising Jesus, right at their table. They said they had been praying to their ancestors for a long time for her hands to be healed, but the prayers hadn’t worked. Brandon explained who Jesus is, and they received the gospel with wonder and thankfulness. He went back to his table and for the rest of the evening, the healed woman sat there opening and closing her hand in amazement.

About that time, the waitress came back and asked if she could talk with Brandon outside. She was understandably confused and yet eager, and wanted to know more about God. Brandon shared further insight that the Holy Spirit gave him about her life and told her about Jesus’ love. She gave her heart to the Lord and was filled with the Holy Spirit right there. She was breathless with excitement and declared she was going to tell all of her friends what had happened.

That sounds like something out of the Bible, but it is another very recent display of God’s love from a normal Christian like you and me. It happens regularly to a whole company of believers. He simply made himself available to carry out God’s will in the here and now. He didn’t just share doctrine; he offered proof of who God is.

– Bill Johnson, The Supernatural Power of a Transformed Mind

Other article similar to “The New Normal” – By Bill Johnson